MP advises wrongdoers to get employed 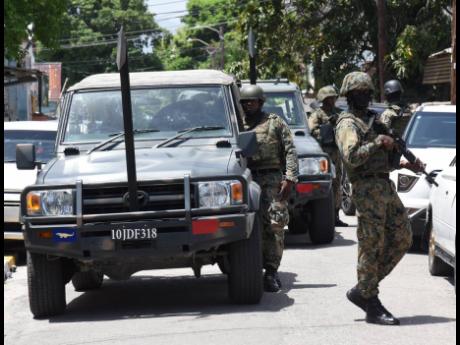 Members of the security forces along James Street in central Kingston.

"Try and get a skill" was the advice of Member of Parliament for Central Kingston Donovan Williams to wrongdoers yesterday, responding to the threat of violence in sections of Rose Gardens.

He was speaking in the aftermath of another alleged fire-bombing incident in the constituency in the wee hours of Tuesday. Williams has warned that a repeat of 2021, which was marred by the murders of 79 people by the gun, was not on the cards.

"They [criminals] need to do something with them life. They need to find a life. People are getting tired of them. The problem is that many of them are too idle. So I am trying to encourage the young men, try to get a skill and don't mek nobody draw yuh inna no gun thing and give yuh no gun fi go fire and hol' corner. Your life is going to cut short," he said. Police statistics show that the Kingston Central Police Division has recorded 30 murders between January 1 to August 14. The figures represent a 17 per cent reduction when compared to the numbers recorded during the corresponding period of last year.

Williams told THE STAR that young persons are being encouraged to get certified in the HEART/NSTA Trust programmes.

"We want people who can learn to put in an electrical socket, know how to do tiling, fix a cabinet and help with a kitchen and HEART is there for them," he said.