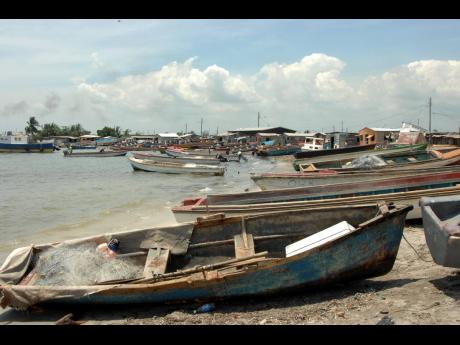 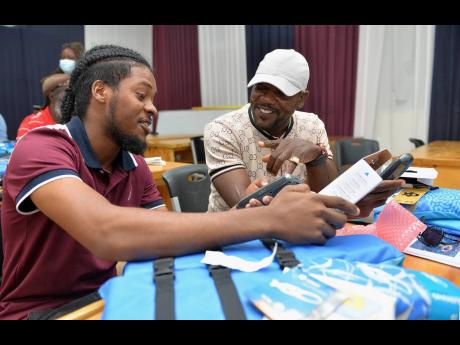 Fishermen Daniel Singh (left) and Carl Wilson examine safety devices presented to them following a safety at sea training programme, which was held at the Caribbean Maritime University in Kingston last week.
1
2

Fisherfolk who participated in the National Fisheries Authority's (NFA) inaugural safety at sea training programme have high praises for the initiative, noting that it will aid in significantly improving their endeavours.

Twenty-one-year-old Daniel Singh of the Hunts Bay Fishing Village in Kingston expressed his appreciation for the knowledge he received, and said he would "highly recommend" the training to other fishers.

"I've learnt new ways of doing things and how to take precautions when there's danger, as well as how to use equipment such as safety tools and gadgets," he said, following the programme's graduation ceremony at the Caribbean Maritime University (CMU) last Thursday.

Singh, who was the youngest participant, hails from a family of fishers and has been fishing for many years. He said one standout lesson from the training is the fact that "just like how there are road codes, there is a code for the sea as well [to guide] how seacrafts should operate when approaching others, and how to communicate without voice".

Veteran fisher Errol Evans of the Rae Town Fishing Village, also in Kingston, who has been in the profession for over 50 years, said the training will not only make him a better fisherman, but will allow him to offer more wisdom to his younger counterparts.

"I've been in very difficult [situations] at sea, and this training can [equip] me to save some of the younger folks from experiencing the difficulties I have been through," he said.

Among the key takeaways from the programme for Evans were discussions on 'how to keep your garbage into your boat and bring it back to land; how to store your fuel at sea; how to encounter with other things when you go to sea; and how to be prepared [with essentials such as] water, food and your tools.

Thirty-year-old Desroy Finnley, also of the Rae Town Fishing Village, was similarly gratified about the training.

"It's a good move for us as fishers because, in everything that we do, safety comes first. It is important that when we go out in the waters, we can return to our families that we have left at shore," said the father of three.

He added that "some of the things I used to do at sea, I [won't] do them any more because of what I have learned at this training".

For the Old Harbour Bay Fishing Village's Keisha Davis, who has been a fisher for over 10 years, the training was "a dream come true".

"I hope to retain what I have learned and use it to help train some of the guys in [the village], because it's really important," she said, pointing out that the detailed training manual which the fishers received during the programme, can be shared with others.

The safety at sea training programme stems from a memorandum of understanding signed earlier this year between the NFA and CMU, with the support of the Ministry of Agriculture and Fisheries, to train local fishers in navigation and seamanship.