No more messiness as family gets proper home 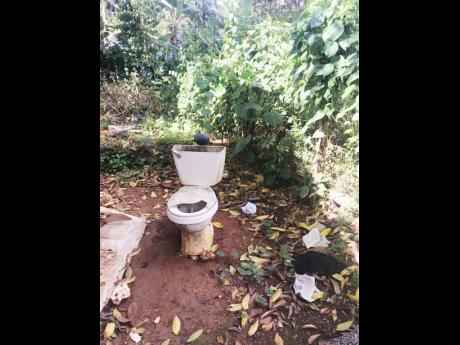 The outside toilet structure that the family was forced to use. 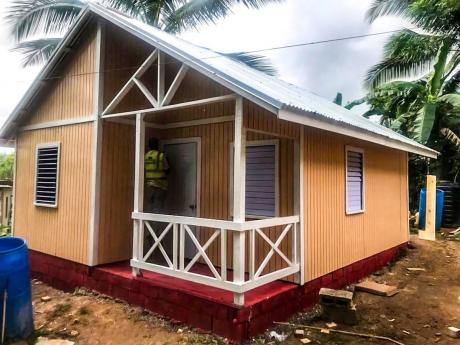 A workman adds the finishing touches to Sharon’s house in St Ann. The single mother and her four daughters now have a proper dwelling to call home.
1
2

After 12 years of living without suitable bathroom facilities, which forced her to dispose of her waste in bags on other people's property, Sharon* can now breathe a sigh of relief.

Last Thursday, the St Ann resident was named a recipient of a two-bedroom home, built by Food For The Poor (FFP) and sponsored by the British Caribbean Insurance Company (BCIC).

"Me comfortable and happy right now, no more flooding. Me a manage good now and I am glad for the help. Me very happy for the assistance," Sharon said.

Her plight was highlighted by this newspaper in January, after public health inspector Shavine Rose informed that she received multiple reports about Sharon's ill-advised practice of disposing of human waste from as early as 2019. Rose became curious and investigated Sharon's situation.

Saddened by the dire living conditions, Rose decided to launch a GoFundMe campaign, aimed at raising US$5,000 to assist in building a bathroom, while Sharon sprang into action by digging a pit latrine. Up to press time, only US$620 was raised. Those funds were instrumental in constructing an outdoor bathroom.

But aside from the bathroom, the home that Sharon, 28, and her children called home was dilapidated and flooded when it rained. Now her prayers have been answered.

"Me feel good and my children dem happy, that a the most important part. Dem always a bawl and say dem want use the bathroom inside and when the house flood it uncomfortable. We affi lean up one a di bed dem, because the bottom a drop out and we put it in a corner and affi stay on another bed in a corner because the whole place a flood weh. The house top a leak, enuh, so all a the water a run down pon the wall and come in the house," Sharon said. "Sometime me just feel frustrated," she added.

Rose told THE STAR that she is happy about the favourable outcome for Sharon, following dialogue with FFP in June.

"Knowing that she has a home for herself and her four girls makes me extremely happy! I would just like to extend gratitude to all those who participated and donated towards the toilet facility," Rose shared, naming dancehall artiste Bounty Killer, as well as members of the St Ann Health Department Inspectorate and Gem Palace Ocho Rios as donors.

Rose shared that out of Sharon's situation, she has commenced a project named Environmental Health Liaison Intervention for Transformation (Eh-LifT), which is aimed at assisting others faced with a similar sanitation issues.

Marsha Burrell-Rose, marketing and development manager for FFP, told the news team on Monday that it was the mandate of the charitable organisation to care for those in unfortunate situations.

"We knew how serious the case was and so we basically jumped on and we reached out to BCIC who has committed six houses for their 60th anniversary. It was a real joy to construct a house for her family. Sanitation is so important and it is something we take for granted, that we can just go in and use a bathroom and use the shower. But I have seen a family flushing a toilet for the first time," Burrell-Rose said.

Sharon is now intent on starting her own business to further provide for her family and improve her quality of life.