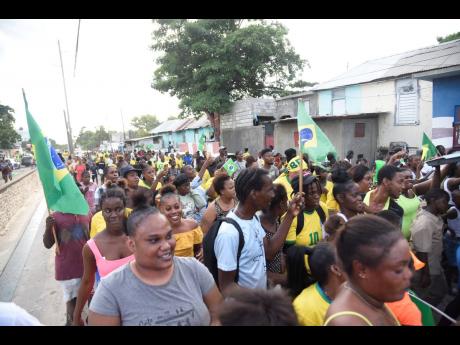 Residents of Trench Town do their Brazil victory parade along Collie Smith Drive yesterday, after the team beat South Korea 4-1 to progress to the quarter-finals. 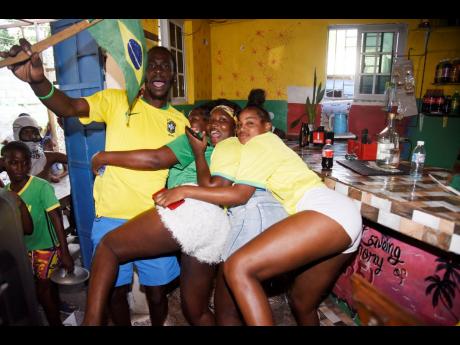 Brazil fans having a great time as their team marches on in the World Cup. 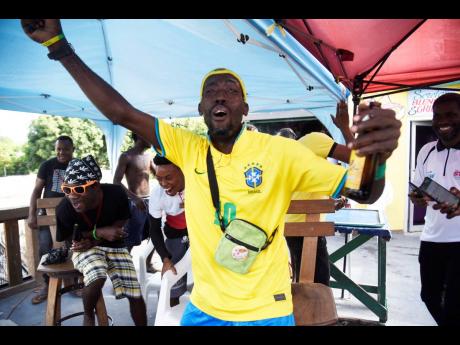 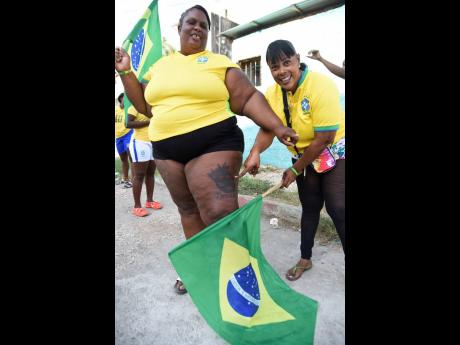 Brazil fans across the Corporate Area, particularly Trench Town, were whipped into a frenzy on Monday following the Samba Kings' thumping performance against South Korea in their round-of-16 clash.

The emphatic victory followed Friday's humbling 1-0 loss to Cameroon in their final group game, but gave rise to a band of excited supporters who later flooded Collie Smith Drive in customary fashion to express their joy. Appearing as one of the most euphoric of the throng of jubilant, flag waving, pot cover banging supporters, Ann Marie Brown-Hall couldn't resist the chance to declare how happy she would be if the South American giants went all the way to lift the trophy on December 18.

"A one Brazil mi say! When Brazil win, mi a go walk naked inna Trench Town, yeah, a dat me say!" uttered the ecstatic seamstress, while clutching tightly on to friend 'Gugu Man' on the back of his bike. Hall later clarified that her comment was meant to be a joke, but others were far more serious with their proclamations.

"My man say Argentina and mi tell him say him cyah get no loving from me until World Cup done or him side drop out," belted another Brazil fan.

She joined the wave of fans who marched up and down the roadway, incessantly blowing their vuvuzelas. If winning a round-of-16 clash against underdogs South Korea triggered so much joy, one can only imagine the pandemonium that would ensue should Brazil beat Argentina if both reach the semi-finals next week.

The prospect of that clash is mouth-watering, according to DJ Fire Ray, who is already looking beyond the quarter-finals where Brazil will play Croatia on Friday.

"A dem (Argentina) mi wah buck fi show dem say Brazil is not a one-man side," he said, in an apparent jibe at the Argentina fans who were present at Duffle Bag Bar off Chisholm Avenue in Kingston to watch Brazil steamroll their way into final eight.

"'Bout Messi this, Messi that. Him a go know who is who when wi buck dem. Mi deeven a think bout Croatia. Good side yes, but dem is no match to Brazil. A dance the man dem a dance dem way into the finals, yuh no see it?" the energetic disc jock continued.

Although claiming to be under the weather, I believe that my Cheer To The Cup co-host, Shanel Lemmie, was more afraid of being present should the Asians upset Brazil - given the nature of the World Cup thus far - and therefore feigned being sick.

However, as Brazil's Lucas Paqueta scored to make it 4-0 before half-time, my WhatsApp immediately started blowing up with videos of her celebrating despite "not being at full health".

Brazil has won a record five World Cups, the last being in 2002. They have set themselves up to extend although getting past Croatia, runners-up in the 2018 version, will not be an easy feat.

"It won't be easy, the Croatian dem have been showing since 1998 that they have World Cup pedigree. But we are Brazil, and we are not afraid of anyone. Anybody weh come dead!" exclaimed Gugu Man before going on another mazy drive.