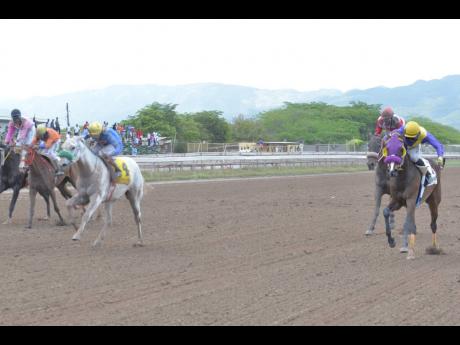 Omar Walker aboard UNCLE VINNIE (right) getting the better of Sotomayor (left) ridden by Anthony Thomas.

UNCLE VINNIE and SUMMER SUN have a score to settle in Saturday's overnight allowance at nine furlongs and 25 yards, their third meeting in what will be four starts in the last two months.

A five-year-old veteran with 48 starts under his girth, local-bred UNCLE VINNIE had the better of United States importee, SUMMER SUN, in back-to-back races, at seven and a half furlongs and a mile, respectively, running contrasting races on either occasion.

In the August 24 Caymanas Anniversary feature, UNCLE VINNIE closed from off the pace to deny SUMMER SUN second, by a neck, behind FAYROUZ, who ran through rivals to easily win the seven-and-a-half furlong event.

Exactly three weeks later, UNCLE VINNIE chased home TOONA CILIATA at a mile in what was a four-length Superstakes warm-up victory, a pace which was too hot for SUMMER SUN to touch, finishing three and three-quarter lengths behind the runner-up.

Whereas UNCLE VINNIE's advantage is a nagging sprinter-stayer pace, SUMMER SUN's main weapon is a love for two-turn races, having recorded the first two of his four career wins at nine furlongs and 25 yards. In addition, the stage has been set for SUMMER SUN's stablemate, speedy SERGEANT RECKLESS, to give UNCLE VINNIE hell on the lead.

However, that tactic has already been tried, without success, at seven and a half furlongs, in the Caymanas Anniversary, SERGEANT RECKLESS carrying the field into the lane, only for FAYROUZ to pounce and grab the spoils, shooting past SUMMER SUN, who, in turn lost second, by a neck, at the wire to UNCLE VINNIE.

It should be recalled that imported SPARKLE DIAMOND was the howling favourite for that event but was scratched, hurt at the gate, creating mayhem among punters who instead got the off-time favourite SUMMER SUN as replacement on their exotic bets.

UNCLE VINNIE, a known front-runner, put in a strange shift that afternoon, running from the back of the field with Kiaman McGregor, the same rider who, in his two previous races aboard the five-year-old, disputed the lead from the start, losing to DYSFUNCTIONBAL and DONTAE at a mile and 10 furlongs, respectively.

After coming from behind in the Caymanas Anniversary, barely grabbing second from SUMMER SUN, UNCLE VINNIE showed him a clean pair of heels, from start to finish, in the Errol Subratie Memorial, with McGregor aboard, to secure second place behind TOONA CILIATA.

Trainer Gary Subratie has removed the visor and will instead fit blinkers for Saturday's race, making his intent clear that whosoever will, may come, when UNCLE VINNIE goes to the lead.