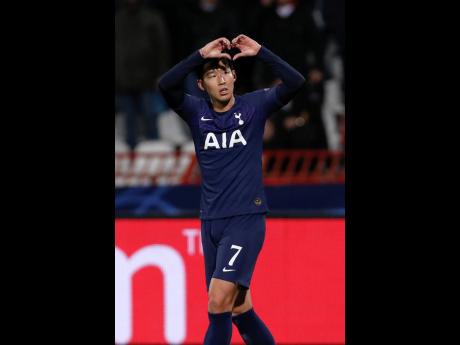 Three days after leaving the field in tears over his role in an opponent's injury, Son Heung-min scored twice as Tottenham beat Red Star Belgrade 4-0 in the UEFA Champions League yesterday.

After hitting the crossbar in the build-up to Tottenham's first goal, Son put the result beyond doubt with two goals in the space of four second-half minutes, sealing Tottenham's second straight Champions League win since losing 7-2 to Bayern Munich last month.

Son scored his first in the 57th minute off a pass from Dele Alli to finish an incisive team move and made it 3-0 shortly after off a cross from Danny Rose.

On Sunday, Son got a red card after his challenge left Everton's Andre Gomes with a fractured ankle. The decision was later overturned on appeal, so he won't serve an English Premier League ban.

After his first goal, Son turned towards the TV camera and made a gesture of apology.

"I didn't want to celebrate. I just wanted to respect the situation," Son said in televised comments. "It's been a tough few days."

Tottenham's first goal against Red Star looked closer to pinball than football as Harry Kane hit the post and Son the crossbar before Giovani Lo Celso finally buried the ball in the net.

Red Star nearly levelled in similar circumstances shortly after when Rajiv van la Parra's shot smacked against the post and Tottenham defender Davinson Sanchez hit his own crossbar with a botched clearance.

Red Star played the last 12 minutes with 10 men after striker Milan Pavkov was stretchered off with an apparently serious injury to his leg after landing awkwardly when challenging for a high ball.

With Red Star a man down, Christian Eriksen made it 4-0 with a deflected shot for his first goal since September 1.

Tottenham last won away from home when they beat Ajax in last season's Champions League semifinals.

The win gives Tottenham a strong hold on second place in Group B, with a four-point cushion to Red Star in third. Leaders Bayern beat Olympiakos 2-0 in the night's other game and have advanced to the knockout stage.

Despite the win, there's still pressure on manager Mauricio Pocchettino ahead of Saturday's Premier League meeting with Sheffield United.

Home and away wins over Red Star are Tottenham's only wins from their last seven games in all competitions.