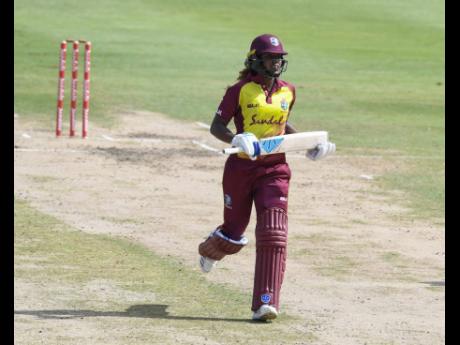 Not even the return of all-rounder Hayley Matthews and another half-century from captain Stafanie Taylor could spark the Windies Women as they suffered a six-wicket thrashing in the final one-day international (ODI) here yesterday to concede the three-match series 2-1.

Choosing to bat first at the Vivian Richards Cricket Stadium, the hosts could only muster 194 all out off their 50 overs, with Taylor stroking 79, Stacy-Ann King getting 38, and Matthews chipping in with 26, in her first outing following an eight-match ban for indiscipline.

In reply, the Indians made light work of the target, with openers Smriti Mandhana (74) and Jemimah Rodrigues (69) slamming up tempo half-centuries to get their side over the line in the 43rd over.

Matthews snatched three for 27 to put a dent in an otherwise polished performance from the visitors, but West Indies found it difficult to rebound after being hurt by an opening stand of 141.

The Windies have now lost 12 of their last 17 ODIs and have not won a series since they beat Sri Lanka in the Caribbean two years ago.

They lie seventh on 13 points in the eight-team ICC Championship, which serves as a qualifier for the 2021 ICC World Cup. Hosts New Zealand and four other top teams in the standings qualify automatically while the bottom three move into a qualifying event.

There was no ideal start for the Windies, crashing to 50 for four in the 18th over, as India seized the early initiative. Matthews gathered an exciting 39-ball 26 with three fours and a six before being run out in the 14th over going for a quick single with Taylor, even though replays showed wicketkeeper Taniya Bhatia breaking the stumps without gathering the ball.

Taylor then anchored two key stands to keep the innings afloat, putting on 34 for the fifth wicket with left-hander Kyshona Knight (16) and another 96 for the sixth wicket with King.

King went in the 49th over after punching two fours and a six off 45 balls, bowled off-stump by a slower ball by pacer Jhulan Goswami (2-30), as the last five wickets went down for 14 runs.

Left-hander Mandhana, in her first match since arriving in the Caribbean last weekend after recovering from a fractured toe, then took the attack to Windies in an innings laced with nine fours and three sixes and requiring a mere 63 balls.

She was well supported by 19-year-old Rodrigues whose innings came from 92 deliveries and included six fours.

Together they raised the hundred in the 20th over as the run rate bounced along at over five runs per over and by the time Rodrigues missed a charge at Matthews in the 26th over and was stumped in the 26th over, the match was long gone.