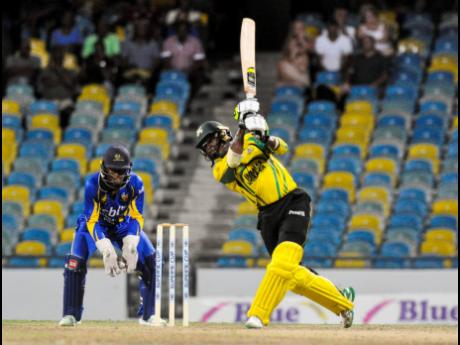 Andre McCarthy hits a four during a Windies Super50 Cup match between Jamaica Scorpions and Barbados Pride on October 20, 2018.

T he Jamaica Scorpions suffered a 75-run loss to the Barbados Pride in their opening group 'A' Super 50 encounter at Warner Park in St Kitts on Thursday.

The Jamaicans, set 266 to win, were dismissed for 190 in 39.5 overs with Man of the Match Andre McCarthy getting a top score of 95 from 83 balls, which included six fours and five sixes.

Wicketkeeper Aldane Thomas, who opened the innings, was the next best scorer for the Jamaicans with 41 from 57 balls as off-spinner Ashley Nurse took 4 for 26 from 8.5 overs and seamer Shamar Holder claiming 3 for 37 from eight overs. Left-arm spinner Joshua Bishop claimed 2 for 54 from eight overs.

It was a lacklustre batting display from the Jamaicans, who lost wickets at regular intervals. Opener Assad Fudadin with 10 and Jermaine Blackwood 12 were the only other players to get into double figures.

The Melbourne CC player credited the help from the coaching staff for his good start to the campaign.

"I just want to dedicate this Man of the Match award to the whole coaching staff for believing in me and having the confidence in me to go out there and showcase my talent. I am disappointed that my team didn't win the game, I should have brought my team over the line but next time I will handle the situation much better", said McCarthy.

Earlier, McCarthy, bowling his part-time off-spin bagged 4 for 41 from 10 overs to help dismiss the Bajans for 265 in 50 overs. Pacer Oshane Thomas took 4 for 52 in eight overs, while there was a wicket for off-spinner Jamie Merchant.

Nicholas Kirton 55 and Kyle Myers 52 scored the bulk of the runs for the Pride with Ashley Nurse chipping in with a cameo 38 from 21 balls and Tevyn Walcott 32 from 38 balls.

The Scorpions will next face the Leeward Islands Hurricanes on Sunday.