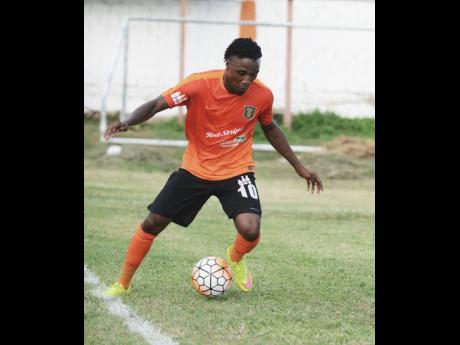 With the 2019-20 Red Stripe Premier League season facing cancellation due to the outbreak of the coronavirus, veteran Tivoli Gardens midfielder Jermaine 'Teddy' Johnson may have to hang up his boots sooner than he wants to.

The 38-year-old has scuffed at the thought of retirement before he leads his native Tivoli Gardens to another title, but the former Reggae Boy said it dawned on him over the weekend that may be his fate as Covid 19 seems like it will force the league to be called off.

"To be honest, yesterday (Saturday) I was thinking about it (being forced to retire) when I met up with some of my teammates at the football field. It was rough when I heard the coach (Philip Williams) said that he is not sure that the league will restart. I started thinking that what if the league should not restart, is this the way I am going to say goodbye to football?" he questioned.

Johnson returned to Tivoli Gardens in 2012 after he was released by English Club Sheffield Wednesday.

Johnson has been flirting with the idea of retirement for the past two seasons.

"If the season is cancelled, I could retire or I could try again. I am not sure as yet," he said.

After a patchy start to their 2019-20 campaign, Tivoli Gardens restored their pride as they were in play-offs contention when the league was suspended in early March as Jamaica confirmed its first case of the deadly coronavirus.

"We were aiming for the top six and then we actually went up there. We are in fifth place, but then we have to understand the situation that is going on in the world right now. We just have to accept it and know that health comes before football right now," Johnson said.

The speedy player spent most of his career in England where he also represented Bolton Wanderers, Oldham Athletic, and Bradford City.

"I think my most memorable moment playing football is that game against Arsenal," he said. Johnson came on as 62nd-minute substitute against Arsenal in the premier league on April 29 2002.