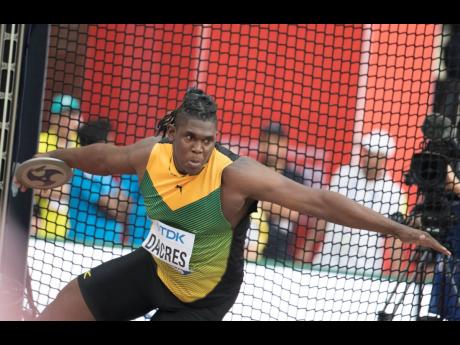 Fedrick Dacres competes in the discus throw qualifiers at the 2019 IAAF World Athletic Championships in Doha, Qatar, on Saturday September 28, 2019.

World championship discus throw silver medallist Fedrick Dacres is still optimistic that there will still be meets to compete in sometime this year.

The coronavirus pandemic has forced the postponement of several events on this year's track and field calendar including the start of the Diamond League season.

Following the rescheduling of the first three meets in Qatar and China, respectively, World Athletics on March 26 postponed three more events for next month that were slated to take place in Sweden, Italy and Morocco. The biggest casualty of the season was the postponement of the Tokyo Olympics by the International Olympic Committee (IOC) on March 24, which has since been pushed back to July 23, 2021.

Dacres training has been limited as he adheres to local restrictions to fight against the spread of the virus but nevertheless he still holds hope to compete at some point this year should the current crisis subsides.

"Training [is] similar for everyone now based on the whole isolation situation but I think we are hopeful all the same," Dacres told STAR Sports. "This season has not been cancelled although the big thing [Olympics] has been [postponed]. Probably some minor meets might happen, I'm not sure." We are not as enthused about the season but we are still trying to face it."

Athletes are currently facing a season of lost income due to the postponement of meets worldwide and although Dacres agrees that the right decision was made, he says that athletes will feel the impact that rescheduling will bring.

"It was right decision to postpone [meets]. [But] it is really rough for us as sports people. We have taken a really big hit but it is what it is," he said. "We can't do anything about it. Hopefully, 2021 we will get it right."

Local meets have not been immune to the virus as the Jamaican International Invitational scheduled for May has been pushed back to a later date. No decisions have been made as yet regarding the National Senior Championships or the Racers Grand Prix which are both scheduled for June.