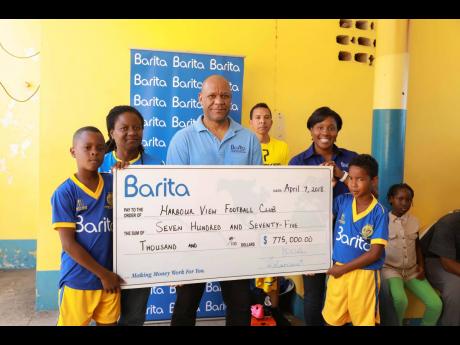 Harbour View FC (HVFC) is mourning the passing of Under-13 FirstKick Team Manager, Monica Malcolm-McFarlane. She died at hospital on Sunday after ailing for some time.

Harbour View general manager, Clyde Jureidini, who worked with her, and her husband, under-13 coach Sydney McFarlane, at the junior level, says she brought professionalism and a women's touch in a male dominated sport.

"She became the female team manager in the group and she brought a different side, both with her professionalism and as a teacher," Jureidini said. "She had a love and commitment for the sport and the kids. But as a female, she brought a totally different view to the thing that we appreciated.

"Out of that, we built up over the last four years and we are unbeaten KSAFA under-13 champions. So she helped build the base of which the parents, families, and the football club was enlightened, expanded and grown from that base, and her love and commitment to that will always be treasured."

Malcolm-McFarlane, who turned 54 at the end of March, had been in and out of hospital since January and Jureidini said her condition deteriorated quickly over the last few months and her passing has hit her husband especially hard.

"She had been going through different treatments and unfortunately the complications worsened and she passed," Jureidini said. "It's been very rough on him, as you would expect. But we are trying to support him and the family. We are doing whatever we can under the COVID-19 restrictions. Many persons weren't able to visit her in the hospital, or reach out to her. So everybody is missing her."

He said the club was looking to give her the sending off she deserves and was hoping the COVID-19 pandemic subsides in time for them to host proper funeral in her honour.

"We have to wait for the family and see how the restrictions go, but we will keep everyone in touch, based on what the family wants to do," he said.

Malcolm-McFarlane was a teacher at the Happy Venture Basic School in Harbour View and has been part of the football club's youth programmme for the last 12 years.