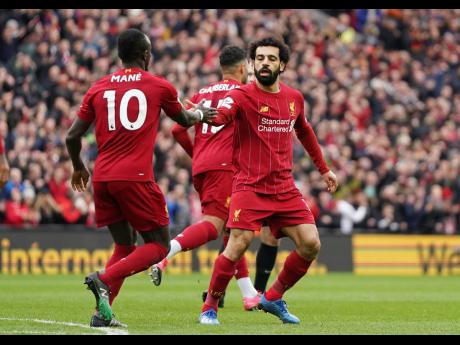 Liverpool’s Mohamed Sala (right) celebrates with his teammate Sadio Mane after scoring his side’s opening goal during their English Premier League match against Bournemouth at Anfield Stadium in Liverpool, England, on Saturday, March 7, 2020.

Liverpool will no longer use a government scheme to furlough some non-playing staff after a backlash against the use of public cash by the wealthy European champions.

Liverpool Chief Executive Peter Moore said, "We believe we came to the wrong conclusion last week to announce that we intended to apply to the Coronavirus Retention Scheme and furlough staff due to the suspension of the Premier League football calendar, and are truly sorry for that."

Under a job-retention scheme implemented to help businesses survive the national lockdown, staff can be put on furlough and receive 80 per cent of their salaries from the government, up to a maximum of PS2,500 (over J$415,000) a month.

Liverpool had said it would top up salaries to ensure staff still received the full amount, but that still means using public funds to pay some staff.

Moore says the club still wants to "ensure the entire workforce is given as much protection as possible from redundancy and/or loss of earnings during this unprecedented period" but is now seeking "alternative ways to operate while there are no football matches".

Liverpool lead the league with 25 points and nine games to go, in a season that has been indefinitely suspended.

Moore said "despite the fact we were in a healthy position before this crisis, our revenues have been shut off, yet our outgoings remain".