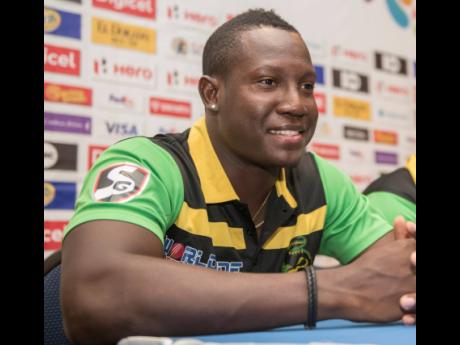 The Jamaica Tallawahs yesterday announced four Caribbean players they will be retaining for the 2020 Hero Caribbean Premier League (CPL), which is slated to get under way in late August.

The four players - Andre Russell, Rovman Powell, Chadwick Walton and Oshane Thomas - are familiar faces in the Jamaican set-up and will form the base of the squad for the two-time champions.

The Tallawahs are expected to announce their international retentions and new signings at a later date. Jeff Miller, CEO of the Tallawahs, said this year will be a rebuilding year for the Jamaican franchise.

"The Tallawahs organisation will be seeking to rebuild in 2020. We are extremely excited to have Andre Russell back for another year. Andre was recently named as the leading T20 cricketer in the world by the 2020 edition of Wisden Cricketers' Almanack.

"We are delighted for the opportunity to retain Oshane Thomas and Rovman Powell, both rising stars in West Indies and world cricket. I'm looking forward to having the veteran Chadwick Walton back in the dressing room. Chadwick brings a wealth of leadership experience to the team and has been a dominant player over the years in the CPL. Overall, we are looking forward to a successful CPL 2020 and returning the championship to Jamaica."

In the meantime, all-rounder Rovman Powell believes the core of the Tallawahs squad is a decent one, and the team will be looking to complement the retained players with some good buys in the draft.

"I think it's pretty decent retention. If you should look over the years on the Tallawahs franchise, those are the persons that they have retained, and we just have to step up and put in some good performances," said Powell.

The Tallawahs finished at the bottom of the standings in last year's CPL following just two wins in 10 games.

While the organisers have scheduled the start of the tournament for August 19, it could be postponed. All teams are now on a coronavirus pandemic watch as they look to get the green light from medical advisers and the various regional governments. Up to Wednesday, there were 509 confirmed cases of the virus in Jamaica. One hundred and thirteen persons have recovered while there have been nine deaths.