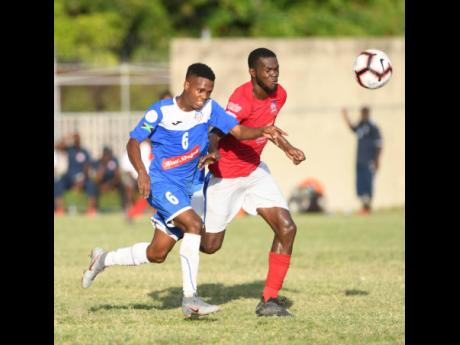 Oliveira said the Brazilian club was in love with young Walker who had an impressive training stint with the club.

However, Walker's contract with Red Stripe Premier League outfit Portmore prevented the former Clarendon College from joining the under-20s (amateurs in Brazil), so they were unable to make the deal work.

Speaking with Simon Crosskill on Sports Grill on Monday, Oliveira said the situation made him so sad.

Oliveira, who also played for Vasco but retired early due to injury, used his contacts to get Walker the trial after watching him at the Pan American Games in Peru last year

"I know a lot of personalities because I am involved in Brazilian football. I called Horace (Reid) because I saw Lamar playing in the national team in Peru in under- 23. I saw two games and I saw a talented player, powerful player," he said.

But despite his impressive stint, the fact that he had a contract with Portmore made the move impossible at the time.

"He did fantastic. When it was over he got an evaluation and he did great, they loved him.

"Around the end of November he (Vasco president) called me and said where is the Jamaican, where is the Reggae Boy, let's make a contract with him.

"So Vasco da Gama wanted a contract with him. But there was one problem, at that time Vasco had the Sao Paolo Cup at the beginning of the year and all the scouts (Madrid, Bayern) in the world come to watch this," he noted.

"He (president) said if we are going to sign him on a year contract, let's get him to play this cup.

"But he asked, does he has a professional contract there."

He said after confirming Walker's contract with Portmore, Vasco could not sign him to play the tournament, as the Brazilian transfer window was closed.

"I said yes he has a professional contract. And he said no Clovis the window is close in Brazil, so we cannot sign a contract and that was the thing that really happened regarding Lamar.

"They loved him, they wanted to make a contract with him, one, two years. But, unfortunately, he had a (professional) contract and couldn't make it.

"I felt very sad this didn't happen. He's a skill, speedy Jamaican, very technical and he did very well in the time he was here" he said.