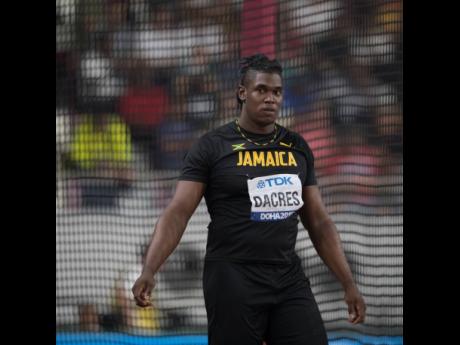 National discus throw record holder Fedrick Dacres is apprehensive about a return to competition during the COVID-19 pandemic.

Dacres is a regular competitor on the World Athletics Diamond League circuit, where he even set the national record of 70.78m in Rabat, Morocco, last year. However, to return to competing in a pre-pandemic manner would require frequent global travel by athletes as events on the circuit take place in cities around the world. Health officials have advised against such travel until a vaccine has been developed. But Dacres says that there is a rush to have the medication developed and he is fearful of what could happen if it is administered before enough of a consensus about its safety is achieved.

"I'm not really for the vaccine because there's just way too many possibilities of what could happen," Dacres told STAR Sports. "I'm not an anti-vaxxer, but it's just that if there was a general worldwide consensus that a vaccine would work, then fine, I'd be okay with it. But it's only a particular set of people pushing for the vaccine and I've seen situations where medication isn't working. For me, the vaccine thing isn't general right now and I don't want to be a guinea pig for that."

The Jamaica Athletics Administrative Association (JAAA) has said strict hygiene protocols would be taken during upcoming All Comers meets at the National Stadium to safeguard against the spread of the virus. However, Dacres said that such an environment still won't be entirely safe, although he appreciates the effort of the JAAA.

"It's not safe, honestly it can't be safe," he said with a reflective pause. "But it's better than not doing anything. At least they're trying to get some sort of normalcy back, so I appreciate the precaution.

"It is what it is, track and field is a business. I'm not really for it, but if it has to be done, why not?"

Sports Minister Olivia Grange had recently given the JAAA approval for its athletes to start training for a resumption in track and field events. Now, the association is looking to have the first of a series of All Comers meets take place later this summer.