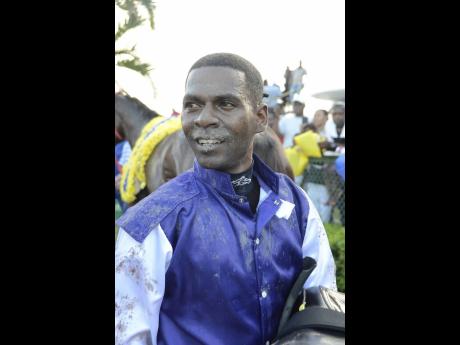 FATHER PATRICK appeared himself last Saturday, when chasing home 2000 Guineas-bound stablemate, MAHOGANY, at five and a half furlongs, his best race in three outings, a win included, since returning off an eight-month lay-up on February 16.

Considered a classic horse last season, beaten a length and a half by TOONA CILIATA in the Prince Consort Stakes, FATHER PATRICK blew a fuse after straightening fourth in the 2000 Guineas and finished nearly last. He was beaten 23 lengths by second-place TOONA CILIATA, who was two behind stablemate SUPREME SOUL.

Returning early June, FATHER PATRICK soared to the lead in a rich race, a headline he disputed with ROJORN DI PILOT, ENEDINA and PRINCE CHARLES, stalked by super-fit GOD OF LOVE. Though a length and a half clear at the furlong pole, splits of 22.3 and 45.0 took a toll and GOD OF LOVE swept by FATHER PATRICK a half-furlong out to win the five-and-a-half event in 1:05.3, one of the fastest times recorded at the distance last season.

FATHER PATRICK never returned until eight months later, opening his 2020 season mid-February, but was obviously ring-rusty, not showing his customary dash, running wide into the straight and finishing two and a quarter lengths behind BALTUSROL at five furlongs round.

With the cobwebs out of his system on March 7, FATHER PATRICK made short work of United States-bred ACTION RUN at five furlongs straight, took a forced COVID-19 break, and returned to show his class last Saturday by moving as a team with MAHOGANY, pouncing on ENGLAND'S ROSE and SHE'S A HIT, putting the fillies in their place as he closed an Ian Parsard exacta.

Omar Walker replaces apprentice Youville Pinnock aboard FATHER PATRICK for Saturday's restricted allowance at six and a half, renewing rivalry with BALTUSROL, who leads a quartet of runners for champion trainer Anthony Nunes.

Run-on sprinter, DUKE, who won first time out for his new trainer, Gary Subratie, two Saturdays ago, is also in the nine-horse line-up, which should be a pacey affair featuring ROY ROGERS, FORMAL FASHION, TRULY AMAZING, BALTUSROL and FATHER PATRICK as the speedsters.

Subratie must be relishing DUKE's chances at six and a half in a field stacked with speedsters. However, in putting away ACTION RUN, he posted a modest 1:00.1 whereas FATHER PATRICK was a full second faster when beating the American at the distance in March.

FATHER PATRICK appears to have also matured, running a more relaxed race on Saturday, suggesting he should stay six and a half. He quickened nicely midway the stretch run and proved he was clearly the second-best horse in the line-up behind MAHOGANY, who announced himself, in no uncertain manner, as the horse WOW WOW will have to beat in the 2000 Guineas.