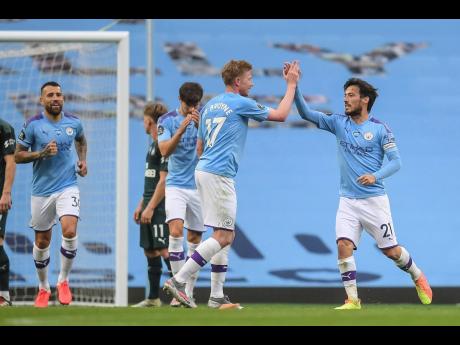 Manchester City’s David Silva (right) celebrates after scoring a goal during the English Premier League match against Newcastle United at the Ethiad Stadium in Manchester, England, on Wednesday.

The Court of Arbitration for Sport (CAS) upheld City's appeal against the UEFA ban, but imposed a EU10 million (J$1.6 billion) fine on the club for failing to cooperate with independent investigators.

Some UEFA allegations accusing City of finance rules violations dating back several years were not proven and others were "time-barred," the court said.

CAS plans to publish a detailed written verdict within days. That could help explain why UEFA's case did not comply with its own internal rules, and show how other evidence was weighed.

The decision by the three CAS judges clears the team coached by Pep Guardiola to play in the group stage of the Champions League next season. The case does not affect City's place in this season's competition, which resumes next month.

City's win guarantees tens of millions of dollars in UEFA prize money next season. It also protects against players leaving to seek Champions League action with another club.

Guardiola had pledged to stay in Manchester "no matter what happens" in the courts.

"The club welcomes the implications of today's ruling as a validation of the club's position and the body of evidence that it was able to present," City said in a statement.

City denied wrongdoing, and said they had "irrefutable evidence" the claims were not true.

"The CAS award emphasised that most of the alleged breaches reported by the Adjudicatory Chamber of the (UEFA club finance panel) were either not established or time-barred," the court said.

City's win will raise doubts about the future of the UEFA Financial Fair Play programme, created in 2009 after the global financial crisis.

The system was used to ban several clubs, including Galatasaray in 2016, from one season of UEFA competitions. City was the first club to be banned for two years.

In a statement, UEFA pointed blame at its own club finance investigators and judges for "insufficient conclusive evidence to uphold all of the (panel's) conclusions" and not meeting a five-year statute of limitations.