Walsh pushing for subcontinent tour ahead of World Cup qualifiers 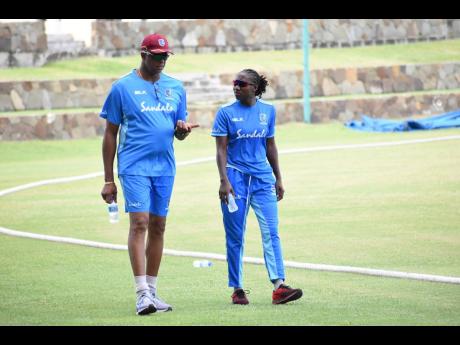 West Indies Women's senior head coach Courtney Walsh says he will be pushing to secure a tour of the subcontinent as part of the team's preparations for the upcoming ICC Women's World Cup qualifiers in Sri Lanka in June and July of this year.

The West Indies is among the 10 teams who will be vying to secure a place at the 2022 showpiece in New Zealand.

Walsh, who recently took over the team, is currently preparing the ladies at a training camp organised by Cricket West Indies at the Coolidge Cricket Ground in Antigua.

Walsh says the current assessment camp, which is focusing on the team's fitness, will be crucial in selecting players for upcoming fixtures; however, a tour in the near future will be crucial if the regional ladies are to do well at the qualifiers later in the year.

In the meantime, Walsh says he is glad to have compatriot Robert Samuels as his assistant coach at the training camp.

The former Jamaica Scorpions head coach was appointed to assist the team in the batting department, and Walsh says Samuels' inclusion will be critical to the overall plans for the women's programme.

"Robert and I started from under-15 days back in Jamaica. I know he has a lot of experience, but what I like most about him is his work ethic. His eagerness to work with the ladies was one of the big push for me because when I approached him, he did not hesitate to say yes.

"I am confident he can do a very good job to improve one of the areas which need immediate attention, which is our batting," he said.