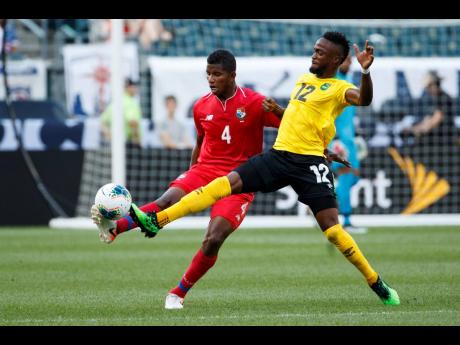 Junior Flemmings (right) in action for Jamaica during a Concacaf Gold Cup match against Panama on Sunday, June 30, 2019.

National striker Junior Flemmings is apologetic about the incident in the United Soccer League (USL) last season where he was sanctioned for using a Jamaican homophobic slur against an openly gay opponent.

Flemmings, who last represented Phoenix Rising, signed for Alabama-based Birmingham Legion FC in the USL yesterday after being released by the previous club. He was sanctioned by USL with a six-game ban and fined an undisclosed fee for an incident involving San Diego Loyal player Collin Martin.

"I am very sorry about the incident with Collin Martin," Flemmings said in a statement on the Legion FC website. "I understand the impact words have, and I will work hard to improve my on-field demeanour even in the heat of battle. I am grateful for this opportunity as I believe Birmingham is a great place for me to grow both on and off the field. I am excited to play for coach [Tom] Soehn and be a part of Legion FC's strong locker room culture."

Legion FC, who signed 24-year-old Flemmings to a one-year deal, said they are allowing him a second chance. Its captain, Mikey Lopez, an activist for the LGBTQ+ community, says the team is behind Flemmings and ready to support him.

"As a team, we believe in second chances and in opportunities for growth as people and as athletes," Lopez said. "We have a tight locker room at Legion FC, so if Junior continues to learn from this and comes in ready to work hard on the field, our group will support him."

The club said it consulted Flemmings, his former coaches, and teammates to get a better understanding of his character before signing him. Legion FC also had conversations with Martin and Loyal head coach Landon Donovan to hear their views on whether he should be signed.

"Personally, I didn't want Junior's career to end, but more importantly that we learn as players and as a society to be respectful of our differences," Martin said. "I'm optimistic that we will be better because of this and that Junior will help advocate for respect within our game. I wish Junior continued success at Legion FC."

Donovan said Loyal's actions after the incident were not to end Flemmings' career, but to stand up for what the club believes is right.

"After the events at the end of our season last year, we made it very clear that we were standing up for what was right and weren't looking to ruin anybody's career," Donovan said. "I'm hopeful that Junior has learned from this experience and will use it to have a positive impact on people going forward. We wish him the very best of luck in Birmingham."

Legion FC says Flemmings will undergo league-mandated sensitivity training and education through the USL's partnership with the Institute for Sport and Social Justice, and it will also partner with Magic City Acceptance Center for sensitivity training seminars this season to help educate its athletes on inclusion and the overall LGBTQ+ community.

Flemmings has the option for a second season in his contract, pending league and federation approval and completion of a P1 visa.

Having only served four of the six-game ban with Rising, Flemmings will miss the first two games of the new USL season.

Flemmings won the Golden Boot award and was named league MVP last season after scoring 14 goals in 14 appearances for Rising.