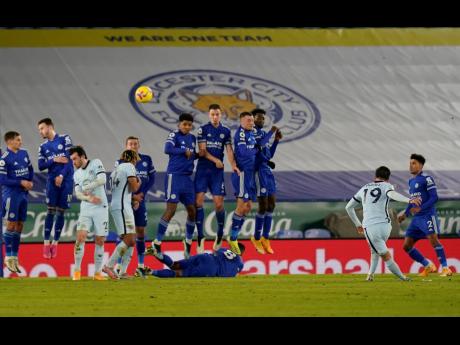 Five years after achieving the unthinkable, Leicester are back atop the Premier League and making another improbable run at the title.

For big-spending Chelsea and their under-pressure manager, Frank Lampard, any ambitions of winning the league already appear to be dashed.

Leicester beat Chelsea 2-0 yesterday to jump above the two Manchester clubs, United and City, and reach the midway stage of their league campaign in first place.

Even if its latest time at the summit lasts just one night - City and United are both in action on Wednesday, after all - Leicester are showing they mean business again. Just like in the 2015-16 season, when the team managed by Claudio Ranieri famously delivered one of the biggest underdog triumphs in sporting history to win the league at odds of 5,000-1.

Wilfred Ndidi and James Maddison scored first-half goals to help Leicester extend their unbeaten run in the league to six games, the last three all being wins.

Chelsea were carved open time and again at the King Power Stadium and fell to a fifth loss in their last eight games in the league, a run of results that leaves Lampard's position precarious after the club's spending spree of approaching $300 million ahead of this season.

Lampard's side dropped to eighth place, nine points behind Leicester, who are a point ahead of United.