‘Tuff Gong’ has no retirement plans 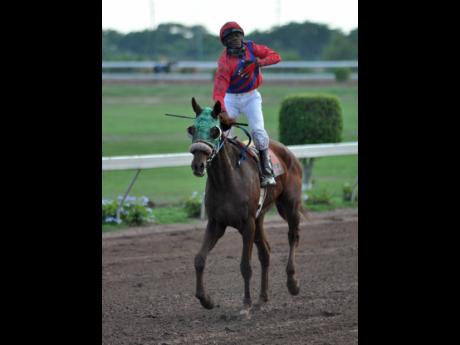 Fifty-six-year-old jockey Dennis 'Tuff Gong' Brown says he has no intentions of hanging up his boots any time soon, as he intends to carry on riding for many more years at Caymanas Park.

Brown, who is the oldest jockey at Caymanas Park, rode two winners, aboard AZUL and SMOKE HAZE for Wayne Parchment last year. However, he told STAR Sports that he is fit and strong and once he is able to secure the live rides, then he will be a force to be reckoned with at the track this season.

"I am here ready and I am aiming to win a lot more races this year," he said. "I have a trainer (Parchment) behind me that is giving me the push and we have an excellent working relationship, and as long as I am getting the rides, I will be riding and winning races.

"I am a hundred per cent fit because I train very hard, and I train like Rambo.

"Before I start exercising horses in the morning, I do a couple of rounds around the track and after exercising, I then go to the gym, so my body is in excellent shape right now."

Brown, a native of Spanish Town in St Catherine, has won over 250 races at Caymanas Park since he began riding in 1983. He holds the record for the longest shot winner at Caymanas Park when he won aboard 500-1 shot BLESSTINE in 2014, shortly after he resumed riding in Jamaica after living in England for more than 16 years.

Brown said that he is well respected by fellow jockeys and he gets along with them quite fine.

"I feel good to know that I am riding against the youngsters because most of them could have been my kids, and even my grandkids," he said. "I get along with them because they show me a lot of love and respect and I also show them a lot of love too.

"I am not going to stop riding until Father God says it is your time because this is my career and I know nothing else. If I should stop riding, I will become a trainer, so I will be in the game forever until the father is ready for me."