Another Affair to stamp class over Double Crown 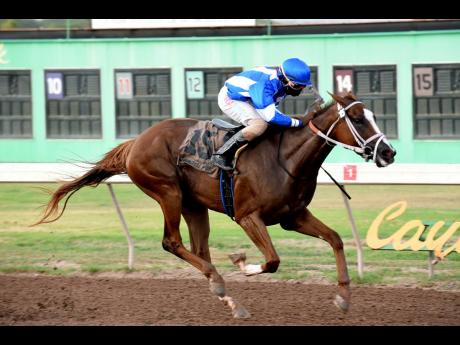 DOUBLE CROWN romped his first two races for a combined winning margin of sixteen and a half lengths. He lost to NIPSTER on his third start just before the COVID-19 break but got some redemption by placing third behind WOW WOW and MAHOGANY in July's 2000 Guineas after racing resumed.

However, DOUBLE CROWN afterwards showed no improvement while old foe NIPSTER grew from strength to strength, finishing ahead of him in four consecutive races, including winning the St Leger and placing second to KING ARTHUR in the Derby.

Resurfacing among non-winners-of-three in December after a two-month break, DOUBLE CROWN appeared rejuvenated, physically, and made short work of rivals on a fast track, clocking 1:31.0 for seven and a half furlongs.

On the contrary, the filly ANOTHER AFFAIR found her best form right after the COVID-19 break, beating KING ARTHUR by an impressive nine and a quarter lengths, at six and a half furlongs, on June 27, before being outclassed by ABOVE AND BEYOND in the 1000 Guineas and Jamaica Oaks.

Playing rabbit for WOW WOW in the St Leger, she led the event for six and a half furlongs before her lesser-fancied stablemate, NIPSTER, stunned all and sundry. She followed up with a big third-place run in the derby, going down by two lengths to KING ARTHUR, relegated late by

NIPSTER, her rider losing his whip in the stretch run.

Though she appeared a bit leg-weary in her last three starts, which included two victories and a third-place run in six weeks to close last season, ANOTHER AFFAIR is preferred to get the better of DOUBLE CROWN despite his fast-time victory on last.

For the last two meets, the track has slowed somewhat, but ANOTHER AFFAIR still posted a bullet 1:00.0 for five furlongs round on Sunday whereas DOUBLE CROWN appeared his old plodding self in clocking 1:15.0 the previous morning.

Having proven herself among the best of the boys, versatile ANOTHER AFFAIR has far more battle scars than DOUBLE CROWN, who is actually skipping a class, non-winners-of-four to tackle older horses in overnight allowance.

ANOTHER AFFAIR represents the filly among the four-year-old Turks, joining the likes of NIPSTER, and MAHOGANY, as a force to reckon with among the older horses. At 112lb, she has the weight and pace to dominate the race.

DOUBLE CROWN's best chance was at the allotted weight, 101lb, but his trainer has given up 11lb to keep Dane Dawkins aboard, a brave decision, having skipped a class, going eight and a half furlongs.