Chace The Great positioned well among the sprinters 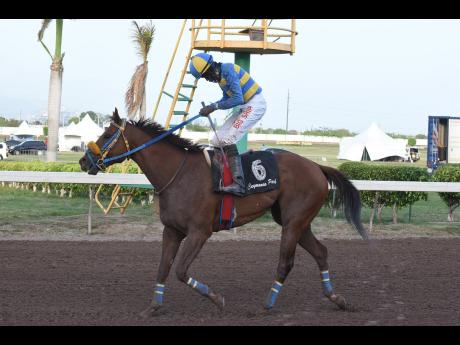 SUNDAY's five-furlong straight overnight-allowance sprint, the Sydney Watson Memorial, is stacked with speed, which could result in one of the rare occasions that a closer wins at the distance.

DEEP BLUE SEA, VICTORY TURN, CAPTUREMYSHIP, TRULY AMAZING and SEA SWAN all have good speed with one intent, going gate-to-wire, which could lead to their Waterloo, a victory for topweight-closer CHACE THE GREAT.

Using ENGLAND'S ROSE as a speed marker, two runners, CAPTUREMYSHIP and SEA SWAN, have shown good pace against the quick filly but could end up cancelling not only each other, but forcing most off their bridles too early.

Despite being suspect, CAPTUREMYSHIP's presence is bad news for DEEP BLUE SEA, TRULY AMAZING and SEA SWAN. DEEP BLUE SEA might have an enviable record as a sprinter but gets a tough draw in a big field for his overnight allowance debut, reporting off a three-month lay-up, one too many marks against him.

SEA SWAN has been showing the speed inherited from her dam, SAINT CECELIA, in recent races. She tried pulling level with ENGLAND'S ROSE midway the stretch run on last. Though outclassed, she stayed second to the last half-furlong, going five and a half. That was a big effort. Returning at the same weight, she is light and will give it her best shot from a good draw.

On paper, TRULY AMAZING is the horse to beat, a course specialist who has a great draw and bustling rider. He has consistently clocked fast times at the distance, dramatically recovering to win in 58.2 after stumbling on October 17. However, he is known to be a tardy starter at times and could be taken out of his of his comfort zone, throwing the event open to a strong closer.

CHACE THE GREAT is heavy but fits the bill. An ageing warrior, who doesn't miss an opportunity to remind, at age eight, that he's a former sprint champion, CHACE THE GREAT might have lost his early speed but closes strongly in his races, which will serve him well from his stands' side draw in a field stacked with cut-throat sprinters.