Shelton knew he was a great player – Bernard 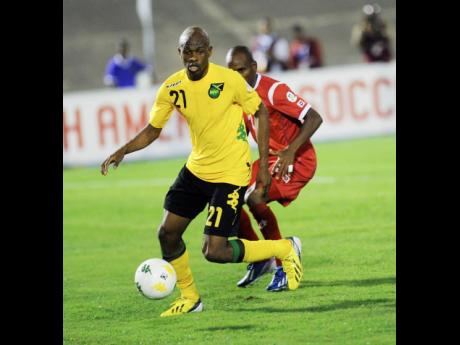 In celebrating the life of former national striker Luton Shelton, Harbour View coach Ludlow Bernard celebrated his determination, commitment and the growth he witnessed from his early youth days to the heights of his career.

A limited number of family, friends and well-wishers gathered at Fellowship Tabernacle yesterday to celebrate Shelton's life, which ended on January 22 after a three-year battle with Lou Gehring's disease, or amyotrophic lateral sclerosis (ALS). He was 35 years old.

Bernard recalled Shelton's beginnings at Harbour View when he joined the youth programme in 1999, and while his technical skills were not as advanced as the others, he kept close to Bernard's side, inquiring what he needed to do to play on the Under-14 squad.

"For that, he assumed a position very close to me, probably much to my mild annoyance, but I was, however, in awe of his explosive speed," Bernard said. "Here began my surgency into really helping him to transform in being a rigid competitor and to understand some of the basic principles of being a professional. The counselling began, the one-on-one conversations starting to resonate with him."

He would go on to represent Wolmer's Boys' School in the Manning Cup, and with one year left of eligibility, Bernard recalled Shelton expressing his desire to become a professional player. Bernard told him that it would demand much more work than he was already putting in, and his answer would turn out to be prophetic.

"It was then that he echoed these famous words:' Coach, I'm going to become the leading goalscorer for Jamaica. You will see'," Bernard said.

He would get his start with the Harbour View first team at 18. In 2004, at 19 years old, he would make his debut for the Reggae Boyz, becoming to date the only man to score four goals in his first international game. He would finish his international career with 35 goals, fulfilling his promise to become the country's all-time leading goalscorer.

Bernard characterised Shelton's wedding to his wife, Bobbette, in 2013 as a moment that signalled him coming full circle, a moment he recalled made him emotional at the ceremony. He says that his football and personal journey is now an example for his other young players, and believes Shelton' place in his country's sporting history is assured.

"He will not be forgotten. He made his family very proud, his club Harbour View very proud, his school Wolmer's and Jamaica," Bernard said. "His legacy is there to stay. He remains a legend for us all and for that, we can be proud to have had a valuable soul."