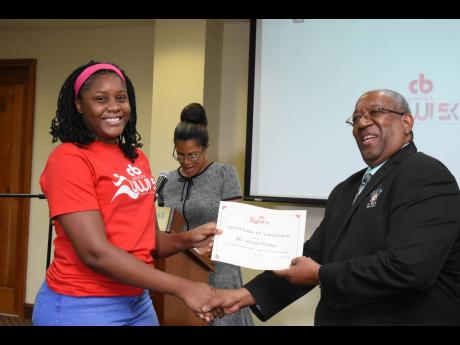 Amanda Pickney (left), final year student in the Faculty of Sports, majoring in Sports Coaching, receives her CB Group UWI 5K scholarship from Professor Dale Webber, Principal of the University of the West Indies, Mona Campus at the launch of the event recently at UWI Regional Headquarters, Mona. Pickney captains Jamaica Under-23 netballers.

The CB Group UWI 5K and Smart Eggs Kids K will return to a road race format on Sunday, November 20, on the University of the West Indies Mona campus, after two years of going virtual because of the coronavirus pandemic.

The event, which was launched at the UWI Regional Headquarters recently, is the major fundraiser for the University of the West Indies in collaboration with title sponsor CB Group and other sponsoring partners for the past 10 years. Another 20 students are being granted scholarships to pursue their dreams of obtaining tertiary education.

Among the awardees were students from the Faculties of Law, Medical Sciences, and Humanities and Education. Since the start of the event, 300 academically outstanding students were given a chance to take up their areas of study.

Co-patron Dr Donette Chin-Loy Chang, who, along with her late husband and philanthropist, Dr Raymond G. Chang, was instrumental in initiating the fundraiser for UWI students under the umbrella of a Grand Jamaica Homecoming movement in celebration of Jamaica's 50th Anniversary in 2012, congratulated the scholarship recipients.

"I applaud you for your determination and drive and implore you to continue to work hard, work smart, limit your intake of social media, separate fact from fiction, and make graciousness and kindness a part of your demeanour," the co-patron advised, from her home in Canada, as she joined the launch through Zoom.

Professor Dale Webber, principal of the University of the West Indies, Mona campus, in expressing his gratitude to CB Group and other partners for their unwavering support, said: "Education is not always available to many due to limited financial resources, and it is, indeed, disheartening when we hear of students deregistering or not being able to take their exams. We again thank our partners for helping us to get to the end of our mission of making the dream of tertiary education available to many."

Joelle Fontaine, corporate marketing manager of CB Group, also congratulated the awardees on their achievement and underscored the company's support for education as something that has long been embedded in the DNA.

Fabian Morris, a student of the Faculty of Law, extended a message of gratitude on behalf of the recipients and shared some of his challenges they encounted, as having to abandon his Gordon Pen home in Spanish Town due to violence, but used this as a stepping stone towards his goals.

Returning as race director, Alfred 'Frano' Francis, head of Running Events Limited, lauded the fundraiser as one that was both saving and changing lives and urged the awardees and other past recipients to round up their associates to support the event, which had given them a chance at achieving their dreams.