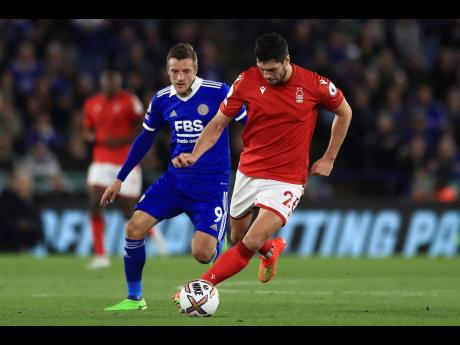 Getting 22 new signings to gel is proving to be a mightily difficult task for Nottingham Forest manager Steve Cooper.

A 4-0 loss at previously winless Leicester dropped Forest into last place in the English Premier League (EPL) yesterday, leaving Cooper at risk of becoming the latest top-flight manager to lose his job.

In front of the club's Thai owner, Aiyawatt Srivaddhanaprabha, who flew in for the match, Leicester earned some respite with a dominant display that ended a six-match losing run.

James Maddison scored two -- one being a curling free kick in off the far post -- while Harvey Barnes and substitute Patson Daka, with a deft flick from Maddison's cross, added the others at a rocking King Power Stadium.

The pressure, for now, is off Leicester manager Brendan Rodgers, who looked and sounded like someone who could no longer get the best out of his squad following a 6-2 loss at Tottenham before the international break.

"It was a season-changing game," Rodgers said, "and to get the performance we did, hopefully, we can push on.

"I felt we had a horrendous summer -- that is the reality -- and it continued into the season. We just didn't play to the levels ... but we've been able to reset that."

Now, Cooper is the manager battling to survive.

After securing a return to the league after a 23-year absence, Forest have been one of Europe's highest spenders -- bringing in a record 22 players at a cost of more than $150 million.

Unsurprisingly, it is taking Cooper some time to discover his best line-up or formation. It remains to be seen how much longer he gets, with Forest replacing Leicester at the bottom and having conceded 16 goals in their last four games. They have lost five in a row.

Leicester scored three goals in a 10-minute span from the 25th to damage Forest's fragile confidence. Maddison set the hosts on their way with a shot that deflected in off Scott McKenna.

Two minutes later, Barnes curled a shot into the bottom corner from the edge of the area after Maddison set Jamie Vardy free with a long-range pass.

Maddison completed the flurry of goals with a free kick from 25 metres that kissed the post as it went in, bringing up his 50th strike for Leicester.

Cooper made three halftime changes -- including the last of his summer signings, right back Serge Aurier -- but things didn't get any better.

Daka, on for Vardy, rounded off the scoring with a deft flick from Maddison's driven cross from the right.