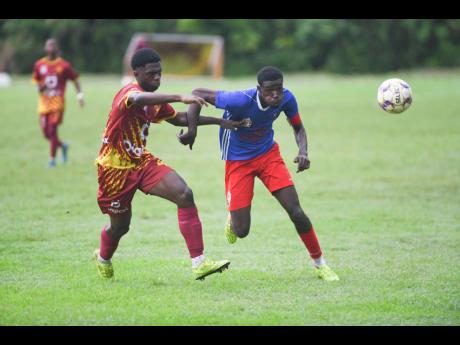 St George's College will seek to avenge their first-round defeat to Waterford in Group A of the Inter-Secondary Schools Sports Association (ISSA)/Digicel schoolboy football Manning Cup when both meet in the return fixture at Winchester Park this afternoon.

Waterford defeated the North Street giants 3-2 in the first round, however, assistant coach Marcel Gayle conceded they were wasteful in front of goal and since that day they have been working on being clinical, while also tighter in defence.

"I just thought the home team took their chances and we didn't take ours. We didn't want to lose but that is a nature of the game sometimes. There are areas we have to improve and we are working on that," he told STAR Sports.

"We created many opportunities. It is just that we didn't put them away and we would have conceded goals which we believe we could have done better. So we have looked at that and we'll try to limit team scoring on us and convert our chances," he commented.

The match will be a fight for second place, as both trail group leaders defending champions Kingston College who have maximum 12 points from four matches. Waterford follow on 10 points, then St George's with nine.

Waterford defeated Meadowbrook 5-0 in their last game, while St George's were 3-0 winners over Ardenne.

Gayle contends that he anticipates a good performance with St George's playing at home and needing the win to stay in close contention for a place in the next stage of the competition.

"We just want to go out and give a good performance. Mentally we are in the right place. We just want to see how they adapt and what you ask of them, they go out there and execute," he said.

In other Group A matches, Ardenne entertain Calabar at Ardenne and Meadowbrook host Kingston College at Constant Spring field.