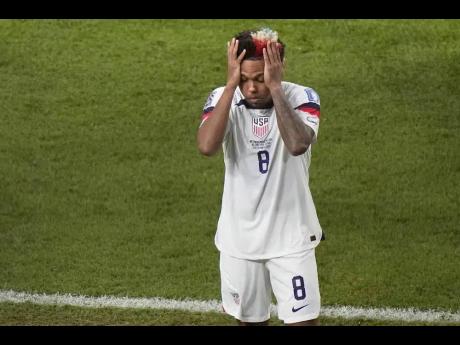 Weston McKennie of the United States leaves the pitch at the end of the World Cup round of 16 football match against the Netherlands at the Khalifa International Stadium in Doha, Qatar on Saturday. The Netherlands won 3-1.

Americans' success in the men's World Cup remains a dream.

The USA looked better this year, but the results were the same as in 2010 and 2014. The Americans were eliminated in the round of 16 following a 3-1 defeat to the Netherlands on Saturday.

"We've shown that we can compete with top-tier teams and we just want to change the narrative because we think, obviously, over the past years we haven't gotten enough respect for U.S. soccer and for the way that we play," midfielder Weston McKennie said. "I think we accomplished a piece of that in this World Cup."

Expectations were high for the USA with a core of young, rising stars who play in some of the top European leagues.

No North and Central American and Caribbean nation have reached the semifinals since the USA in 1930.

Draws against Wales and England were followed by a 1-0 win over Iran that assured a spot in the knockout rounds, and the USA achieved the minimum to avoid being branded a failure. Going home after the group stage would have been a disappointment given the expectations for the team coach Gregg Berhalter rebuilt.

Berhalter was hired in December 2018 from Major League Soccer's Columbus Crew at the recommendation of Earnie Stewart, now the USA sporting director.

Berhalter took over 14 months after the USA lost at Trinidad and Tobago, failing to qualify for the World Cup in Russia and ending a streak of seven straight appearances in the tournament. A segment of fans repeatedly criticised him for his roster selections and tactics and some would prefer a foreign coach with more European experience.

His contract expires this month -- he was paid $1.29 million in the fiscal year ending in March 2021, according to the USA Soccer Federation's latest financial statement. Berhalter has led the Americans to 37 wins, 11 losses and 12 draws.

After the defeat to the Dutch, Berhalter wouldn't say whether he wanted to stay on.

"In the next couple of weeks I'll clear my head, I'll sit down and I'll think about what's next," he said.

"We didn't qualify for the last World Cup and here we are in the round of 16. We've definitely come a long way," Pulisic said. "There's, for sure, moments that we can be proud of, but we don't want to feel like this again, and we want to put ourselves in a position to win tournaments like this."

The CONCACAF Gold Cup from June 26-July 16 is next and most Europe-based players should be available. The USA will have an automatic berth for the 2026 World Cup as a co-host, and next year's Gold Cup will be one of the few opportunities in the cycle to have the core group available for competitive matches.