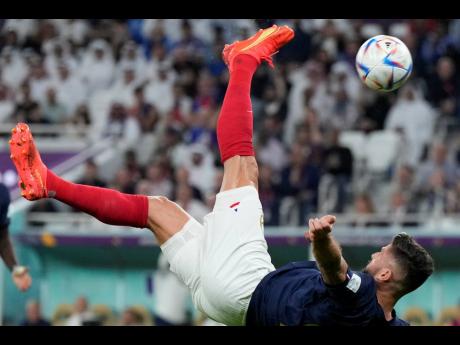 France’s Olivier Giroud shoots to goal during the World Cup round of 16 football match against and Poland, at the Al Thumama Stadium in Doha, Qatar yesterday. France won 3-1.

Giroud broke Thierry Henry's French record with his 52nd goal for his country yesterday when he scored the first in a 3-1 victory over Poland that put the reigning champions in the World Cup quarterfinals.

"I really wanted to score this goal (against Poland). I was kind of relieved after this goal," Giroud said. "We can move on and forget about this because so many people were talking about this. Now it is done, that it is a good thing, but most important is to score more goals to help the team to reach our target, which is to go as far as we can."

The 36-year-old Giroud had tied Henry's record of 51 goals when he scored twice in a 4-1 win over Australia in France's opening game in Qatar.

Against Poland yesterday, Giroud picked up a pass from Kylian Mbappe in the 44th minute and sent a low shot with his left foot past Poland goalkeeper Wojciech Szczesny, his former teammate at Arsenal. Mbappe added two of his own goals.

It was not too long ago that Giroud had no idea if he'd even have a chance to break the record.

He was left off the French squad in May for Nations League games, although France coach Didier Deschamps did not rule out eventually adding the veteran. When he was chosen, it was supposed to be in a substitute role.

Then Karim Benzema, the Real Madrid star and winner of this year's Ballon d'Or award as player of the year, was ruled out on the eve of the tournament with a torn thigh muscle, opening an opportunity for Giroud. He seized that opportunity, and then some.

"I will carry on and I don't know until wherever. I don't want to put any limits on it," Giroud said.