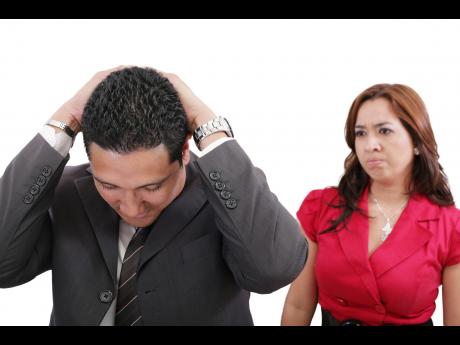 Frrustration eats away at your relationship bit by bit.

Last week, we began emancipating some myths from our marriages. One of those myths is having unrealistic expectations, which can lead to frustration. And for anyone who's been in a relationship, you will admit that frustration is the number one thing that eats away at the core of it bit by bit.

Many times the frustration is directly tied to myths, and the problem with persistent myths is that they can erode a relationship's happiness. That's why it's so critical to bust the misconceptions.

A good relationship doesn't mean that you don't have to work at it because nothing ever just happens. Truth is the strongest, most enduring relationships take lots of hard work. It's like a good garden; it's a beautiful thing, but it cannot thrive without a whole lot of labour and TLC.

You asked me 'how do you know if you're working too hard on a relationship? Well one sign is, if you're feeling unhappy more than you're happy. In other words, are you spending more time tending to the relationship and keeping it afloat than enjoying it? There has to be some sense of 'we're trying really hard, both making changes, and that's making a difference.'

On the flip side, if both of you are trying and you can see positive changes being made at least some of the time, then that's a good sign. Nuh true?

How about, 'If partners really love each other, they know each other's needs and feelings'. It's a set-up to expect your partner to be able to read your mind because when you anticipate that your partner will know your wants, that's essentially what you're doing. We develop this expectation as children, but as adults, we're responsible for communicating our feelings and needs to each other.

And once you've communicated your needs and feelings, a better measure of the quality of your relationship is whether your partner actually listens to your words. So don't assume he/she knows, just tell them. The sure thing is that if you don't work at communication, the relationship will deteriorate over time. All relationships require work.

If a relationship needs counselling it's already too late. There are 900,000 divorces a year in the USA, and fewer than 10 per cent of those couples that divorce ever talk to a professional.

Jamaica is seemingly trying to play catch-up. Couples' counselling therapy is very effective, and many divorced couples could have made it work had they sought help early instead of just trying to work it out.

The goal then is to manage conflict, not always seek to resolve it. It's diversity that makes relationships interesting, not compatibility. We are not looking for our clones, and God never made duplicates.