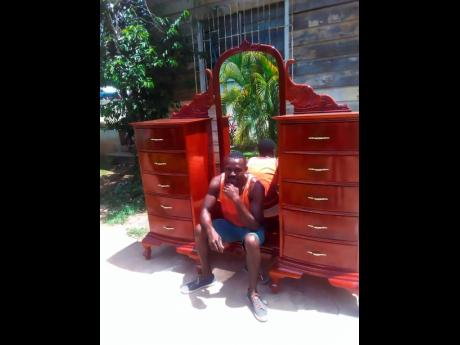 This dresser set is another of Clarke’s pieces. 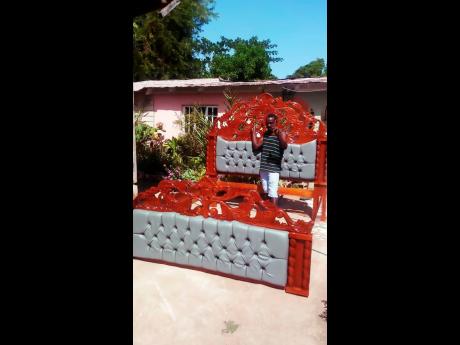 Clarke is proud of his bed headboards.

Having been crippled by financial strains to pursue his dreams in electrical technology, Kevin Clarke ventured into carpentry at age 15 so he could provide for himself.

Clarke, now 39, told THE STAR that he was never passionate about making furniture but life had other plans in store for him.

“I didn’t have any inspiration or have it in mind say I would make furniture, but when I stared doing (it), I get to love it. I was so into it that it took me a year to master it. I surpassed other guys who were there for three to five years,” he said. “I started to read up on it so I could better myself at it, and now this is part of me.”

The dexterous St Cathrine native works from his home in Old Harbour, where he spends most of his days carving, sanding, and fine-tuning hard wood into exquisite pieces.

“I go and buy hard wood right across (including mahogany and cedar) because when I use these, the quality of my products are good. When I put my stuff on the Internet, I want to get good feedback because it is like a driving force for me to create more,” he said.

Clarke’s furnishings were once inspired by what he says is ‘personal imagination’, but he now designs based on his client’s preferences.

“I used to just make things out of my head, but now people will just send me design and ask if I can do it, and I look at it and tell dem I can even do it better,” he said.

For a sole proprietor, it is a bit of a challenge for Clarke to balance conversing with customers and to meet deadlines.

“Right now, most times a just me alone in a the shop, so it’s hard. Nobody don’t want to learn a skill yah now, so I have to be working and trying to talk with customers same time,” he said.

Clarke’s work has captivated the eyes of people all over the island and some are adamant about getting a piece of furniture from his collection.

“Trust me, I get countless calls, sometimes when me check, I miss all 200 calls and I have to return them and get through to everybody. When I check my messages on WhatsApp, I have over 1,000 messages not to mention Instagram and messenger. It take me almost a year to get through messages,” he said.

He added: “But to see where I am coming from and how I do things differently just makes me feel good. I feel satisfied when I see how people are happy and impressed with my work. The feeling I get is greater than the money.”

However, Clarke said that he is concerned that COVID-19 will have a negative impact on his business.

“It a go slow down my business. Right now, nobody don’t want fi come out because dem a think bout their safety and also dem family. Things gonna be slow from now until the rest of the year and dat nuh good,” he said.