Parents told to believe their children 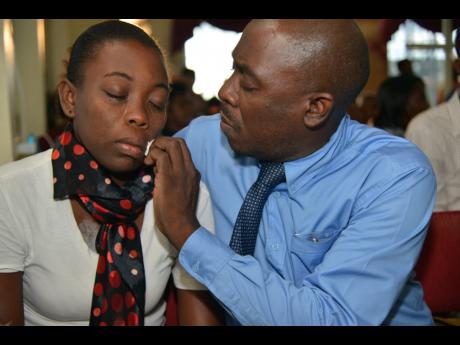 Shante Skyers' mother, Crystal Service, is comforted by Robert Williams of the The Child Protection and Family Services Agency at a community consultation in Sterling Castle Heights, St Andrew on Friday. PHOTO BY KENYON HEMANS.

Children's Advocate Diahann Gordon Harrison has urged parents to believe their children whenever they make reports of sexual abuse.
“We are not saying that you should run with it and do vigilante justice. Children just don’t make up something in detail, and that is very embarrassing. If I ask you when was the last time someone touched you inappropriately, you would be embarrassed to talk about it. Why then would a child, who is so innocent, want to make up a story?” she asked.
Gordon Harrison was speaking at a community consultation held in Sterling Castle in West Rural St Andrew on Thursday night. The consultation was held against the background of last week's murder of Shante Skyers, an eight-year-old who was found dead in a section of the community.
Since the start of the year, there has been 55 reported cases of child abuse in Kingston and St Andrew.
Charmaine Shand, assistant superintendent of police in charge of the Centre for the Investigation of Sexual Offences and Child Abuse (CISOCA), told parents to be more vigilant in protecting their children.
“You are the police officers in your own right. We have to stop accepting that sexual abuse with children under 16 is okay. We need to come together and build a Jamaica where we can live, do business and raise families,” Shand said.