Mother who had five sets of twins seeks assistance 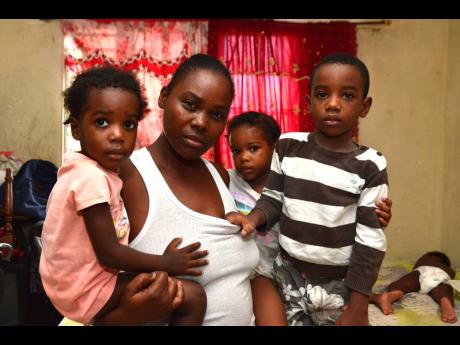 Kerry-Ann Anderson with three of her children.

Experts says the chances of having two sets of twins is about 1:700,000, but Kerry-Ann Anderson of Denham Town, west Kingston, has given birth to five sets of twins, plus two other children.

The 35-year-old said that she never once dreamed of having so many children but looks at them as blessings from the Almighty.

Her third son, Marion Cameron, now 14, followed next, and that same year she gave birth to Angel Cameron, whose twin unfortunately died at birth.

"Mi go back again and get a next twin which is Alphanso Barnes, but his twin died also, and after that I gave birth to Kylie and Hailey Pusey who are now three years old. Mi a say God yuh good. A part of me never wah have so much children because mi mother had eight of us but God bless mi and mi carry dem come. Even some a the doctor dem a say girl yuh great, a shoulda you a my wife," she said between laughter.

The youngest twins, 18-month-old Alesia and Calesha Figorow slept peacefully although their siblings chatted up a storm.

"Mi no have nuh complications with any of them, enuh. I don't want anymore kids though and I got my tubes tied recently. I love them dearly and just know that each of my children are a special blessing from God," she said.

But Anderson's mood changed as she spoke about her living conditions, stating that she is in dire need of assistance.

She was working at the Hydel Group of Schools but has been at home since COVID-19 forced the closure of schools. She said she was promised that she would still be on the institution's payroll.

"All of the kids are given scholarship to attend Hydel and I get $30,000 per month but I have to pay a taxi driver $8,000 per month to take some of them and the rest take public transportation. By the time I buy little food, the money done," she said.

A philanthropist, Donna Gowe, recently donated a mattress, food items and toiletries. Though grateful, Anderson needs more. One of her greatest wishes is to have all her children living under one roof.

She currently shares a home with her sibling and her mother Patricia Bryan, who she said has been her 'backbone'.

"Right now is me and five of the children sleep on one bed so I would really appreciate a bigger space so I can get another bed or two so all the kids can be with me. Some of them are staying with their father side of the family. I would like a TV for them because I don't have any. I would want a fan and even a likkle washing machine because it hard to wash so much clothes with my hands. I would like a fridge and so on because most of the things here belong to my mother but I would want to just get a little space for myself because I know I can't live in the one room with the kids," she said. After numerous broken promises of assistance, she keeps her fingers crossed.

"I don't want to live like this forever. I want to make it for my kids so I am hoping that I will get a chance to attend classes at HEART. I am determined to make the lives of my children better. All I am asking for is a little help," she said.

Persons wishing to assist Anderson may contact her mother Patricia Bryan at 876-990-6770.