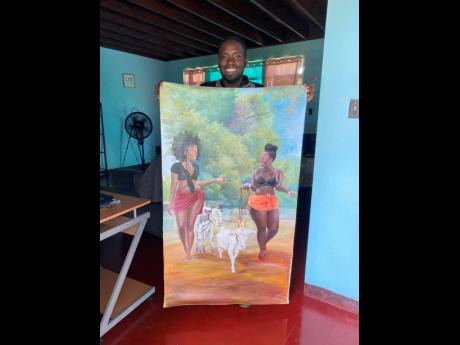 Oneil Clarke showing off one of his pieces.

Today, 34-year-old Oneil Clarke is a confident individual but he readily admitted that for years he was extremely shy, with an inferiority complex and little or no self-esteem.

The visual arts teacher at the Sydney Pagon STEM Academy in St Elizabeth credited close friends and relatives for helping him to overcome.

Growing up, Clarke described himself as a "typical barrel child" who never lacked food or clothes. He was raised by his grandmother and got everything he needed, except the nurturing aspect. He learnt to read in the summer after finishing grade four at Grange Hill Primary School in Westmoreland.

"I visited my mother for the summer holiday. I remembered she had a book, The Jungle Book, and she sat me down the entire summer to read the book. My reading was really poor," he shared. Still struggling with any real sense of worth, when he passed for The Manning's School in Westmoreland, he felt he was not worthy to go there. Clarke even admitted that he could not properly recite all the months of the year. He described high school as "five years of horror" and his shyness got worse. His shrill voice did not help.

"They thought I was mute up until 10th grade when I tried and made an attempt to exit the shell," he said. Despite leaving high school with seven Caribbean Secondary Education Certificate subjects, he said he felt lost.

"I was really confused. I didn't have any goals. I did subjects for subject sake, but didn't have any aim," he recalled. However, his love for art led him to enrol at Montego Bay Community College where he studied architecture. But his first day he panicked and a friend encouraged him to "go in the bathroom and hide for the rest of the day".

Clarke was so introverted that he had no idea how to operate in a public setting, and even travelling from Savanna-la-Mar to Montego Bay for classes was a struggle. His passion for art eventually opened the door of communication as when his classmates saw his drawings, they asked for assistance with their work. Even his teacher referred students to him.

Moving on to do his master's at The Mico University College in 2013, he still battled with low self-esteem but used that to motivate himself.

"It was important to get that degree as I thought it would be a way out. So I focused on education because I wanted to feel like somebody," he said. Clarke tried harder to exit his shell but his voice still bothered him and one student even asked if he was 'straight'.

"It reached a point where I was so stressed that I started having headaches," he shared. Thankfully, he was boarding with some Christians who took him under their wings. Clarke excelled at Mico and ended up being president of the Rotaract Club. But three years ago, Clarke started seeing a psychologist as his social relationships were not working.

"I realised something was seriously wrong and also that people tended to walk on me a lot as well," he shared. The psychologist told him that he had a serious inferiority complex. After receiving counselling, Clarke's perception of intelligence, which he always thought he lacked, changed.

"I realised then that if you don't excel in English or math you are not deemed intelligent 'cause my English was poor. It was my exceptional art skills that got me in Mico. People fed us mastery of English and math is what makes you intelligent," he stated.

It is with a wisdom born from his many mistakes that he can now reach out and advise others to explore their signature strength and not look at anyone else.

"We all have something that we do better than everybody else," he said.