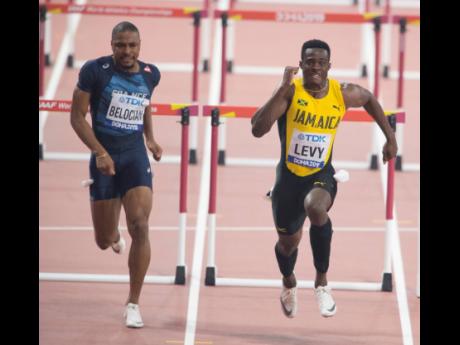 Ronald Levy wins his heat ahead of Wilhem Belocian of France in the preliminary round of the men’s 110m hurdles at the 2019 IAAF World Championships in Doha, Qatar, on September 30.

Sprint hurdler Ronald Levy hopes that the nagging shin injury, which has become a hindrance to his development, is rectified for good after he underwent surgery on Wednesday.

The 2018 Commonwealth champion confirmed, via Instagram on his 27th birthday, that the surgery to correct the stress fracture in his left leg was successful. The former St Elizabeth Technical athlete had been dealing with the discomfort since he captured the 2018 110m hurdles national title. In the post, he revealed that he had been competing with the injury since the second half of last season and entering this year.

"It wasn't until the beginning of the 2019 season I found out that I had actually been competing with a stress fracture for the whole year. With recommendations from my doctor and coach, I started training late January, but despite both rest and treatment, the pain persisted as the fracture was healing slowly," he said.

BALANCING THE PAIN WITH TRAINING

He said that the pain from the injury affected his preparations for the recently concluded World Championships in Doha tremendously.

"I struggled constantly, balancing the pain I felt with training effectively and, eventually, things started to look promising. Until mid-August when my right shin gave way. This was obviously very devastating, but I was focused on the goal and continued my journey with the help of painkillers. It got to the point where walking upstairs, a simple every day task, would cause me pain.

"Despite it all, I persevered and made it [to] Doha. I give God all the glory and [I] am tremendously grateful for all my small victories this year. Vision 2020," the post concluded.

Despite the injury, Levy competed in 12 races in the 2019 season in which he managed to retain the 110m title at the National Championships in 13.23 seconds. His performances since then on the Diamond League circuit has been mixed, with his best placing coming at the Memorial Van Damme meet in Brussels, where he placed second on September 6, his last race before Doha. He managed to qualify for the semi-finals, and his time of 13.60 seemed to be good enough to advance to the finals as one of the fastest losers, but was disqualified after adjudged to have impeded Barbadian athlete Shane Brathwaite. Brathwaite's appeal was successful and it was he, not Levy, who went on to compete in the final.