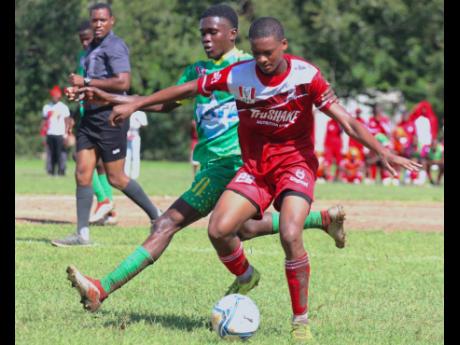 "It's a good win for us as we managed the game very well. Seeing that this is our third game of the season after a couple of weeks of inactivity, it was a mature performance from the boys," Peart said.

The weather system that affected the island for the last two weeks resulted in Glenmuir only playing three matches so far, while some teams in Group M have already played five.

Yesterday, at Port Esquivel, Glenmuir comfortably maintained their perfect record, with Peart commending the players for a workman-like performance.

The win for Glenmuir places them atop the group on goal difference with nine points, the same as Old Harbour and Central High, who have played five and four matches, respectively.

Glenmuir, following their two-week inactivity, took some time to settle on the wet and sloppy Port Esquivel surface, which led to a lengthy period of dormancy in front of goal in the first stanza.

Their first genuine attempt on target eventually turned out to be the game's opening goal. A long-range right-sided free kick from Brandon Wallace floated haplessly to goalkeeper Kristoff Johnson, who made a meal of a catch which slipped through his palms and into the net in the 45th minute.

Glenmuir continued to press in the second half in a bid to double their lead. They got a due reward in the 64th minute when Deandre Johnson picked up a left-sided pass inside the area and unleashed a powerful right-footed shot which flew past substitute goalkeeper Jahiem Hall.

Whyte lamented the absence of his inspirational player Shyjah Orridge, who migrated to England, which contributed to the team's lack of firepower up front.

"The last game we put away our chances and we got similar chances today, but we were unlucky in front of goal," he said.